The island of Korčula, one of the Adriatic's most heavily forested islands, was formerly known for its black pines as Black Korčula, and is today widely known for its wines and olive oils. Not far behind in fame are the historical events whose secrets are still carefully kept in Korčula, the town of towers and ramparts. This island of sword dances and vocal bands is certain to fill the summer not only with its opulent tradition, but also with the wildest modern parties. 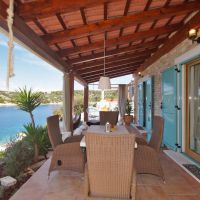