The small fishing town of Lumbarda is found on the easternmost part of the island of Korčula. The sandy bay is rimmed by gentle hills whose tops still carry the remains of prehistoric Illyrian stone forts. Numerous traces of Greek and Roman habitation can be seen around Lumbarda, as well as those more recent Venetian rule. There are also timeless art works inspired by the town's ambience. The sand for which the town is famed covers not only the beaches, but also the vineyards, where a unique autochtonous grape variety known as Grk ("The Greek") is grown and made into the white wine of the same name. 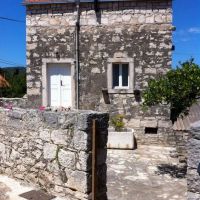 House 17389 in the town of Lumbarda, Korčula - Dalmacia sur is located 500 m from the sea. The nearest beach to this accommodation is a piedra beach. The house…